TO BE READ IN ALL CHURCHES AND CHAPELS

1600th ANNIVERSARY OF THE DEATH OF ST. JEROME

“The word of God is something alive and active: it cuts like any double-edged sword but more finely: it can slip through the place where the soul is divided from the spirit, or joints from the marrow; it can judge the secret emotions and thoughts. No created thing can hide from him; everything is uncovered and open to the eyes of the one to whom we must give an account of ourselves”. (Hebrew 4:12)

With those dramatic words, the author of the letter to the Hebrews reminds us of the power and the beauty of god’s word “written” in the Bible “spoken” and “revealed” in the Incarnation of Jesus, the Word of God Made Flesh. It is he who dwells amongst us. No wonder Pope Benedict XVI proclaimed “The Church is built upon the word of God, She is born from and lives by that word”. (Verbum Domini chapter3). Not only is the Church built upon the word of God. The life of each believer is sustained and nourished by that word both in personal prayer and devotion. It is in responding to the proclamation of God’s word by the quality of our life, and ultimately, in union with Jesus Christ. It is in the Holy Communion we make and receive during Mass that we truly are nourished as members of the Body of Christ.

The year 2020 marks the 1600th anniversary of the death of St. Jerome who translated the Bible into the Vulgate, into Latin, which was the common language of the people. To mark this important anniversary, the Bishops of England and Wales have dedicated the year 2020 as “A Year of the Word”. We have chosen the theme: “The God Who Speaks”. In the past, Catholics have been accused of neglecting the scriptures. The three yearly cycle of the Lectionary which we hear during the Liturgy of the Word Sunday by Sunday has been a precious gift in the life of the Church as it nourishes the life and faith of its’ people. During this coming year, we are invited as a Church and as individuals to engage afresh with the word of God in the following ways:

We remember “In the beginning was the Word and the Word was with God and the Word was God”. (Gospel of John 1:1). That same word was spoken to Moses and the People of Israel (Deuteronomy 34:10) and to the prophets (Cf. Nehemiah 8). The response of the people in faith forms the chronicle of the history of Salvation in response to God’s Revelation. The Hebrew Bible, which we call the Old Testament, is fulfilled in the coming of Jesus, the Messiah whom the prophets had foretold. At the beginning of his ministry in the synagogue in Nazareth, Jesus quoted the prophet Isiah when he said: “The Spirit of the Lord has been given to me…….This text is being fulfilled today even as you listen”. (Luke 4:18). The reading of the Gospels and the letters of the New Testament give us privileged access to this revealed truth.

God’s word is not just a chronicle of past events. It is “alive and active” (cf Hebrew 4:12) and challenges us to respond in faith and action. It is one of the primary sources of our relationship with God. “Speak, Lord, your servant is listening” (1Samuel 3:10). Ultimately we listen to the promptings of God’s Spirit in the silence of our hearts. “Heart speaks to Heart” as Blessed John Henry Newman reflected. We look forward to his canonisation by Pope Francis in October.

God’s word is not just for ourselves, but needs to be shared with those amongst whom we live and work. Most obviously this is done through the care and example we offer to ourselves and others in the challenges of everyday living. Not merely caring for those who are poor in body, mind or spirit, but challenging the very structures which create such poverty and problems. The prophets of the Old Testament constantly condemn injustice and oppression. The social teaching of the Catholic Church is often described as our best kept secret.

Each Diocese in England and Wales is uniquely placed to embrace “The God who Speaks: A Year of the Word”. Each parish has an enormous resource of devoted and committed people who, each in their own way, are able to share the Good News of the Gospel. During the coming year, the Church will listen to the Gospel of Matthew during Mass on Sunday. Individual copies of that gospel will be distributed to parishioners in order that they may, in turn, offer them to others as a gift. 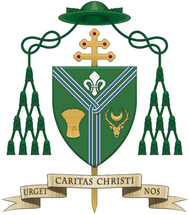